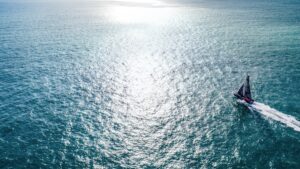 Alex Thomson today departed from Cape Town, South Africa to begin the 6,500nm journey back to the UK onboard his HUGO BOSS boat.

After being forced to retire from the Vendée Globe round-the-world yacht race – which is still under way – Thomson sailed his IMOCA yacht to Cape Town where the boat remained over the Christmas and New Year period.

Thomson and members of his technical team this week returned to Cape Town, successfully replaced the boat’s starboard rudder – which was damaged beyond repair, causing the skipper’s withdrawal from the race – and have since been preparing to sail the boat back to the south coast of England. The delivery is expected to take Thomson and his three crew members around three weeks to complete.

“I’m looking forward to getting back out on the water sailing again” said Thomson, as he prepared to leave the V&A Marina in Cape Town today. “Of course, this is certainly not where we expected to find ourselves. We were expecting to be up there, competing with the leading boats in the Vendée Globe. But we’ll be watching the race closely and wishing all the skippers the very best for the rest of the race.

“For us, the next three weeks provide a very good opportunity to get some more miles under our belts and to learn even more about this beautiful boat and what she’s capable of. We’ll also be continuing to develop some of our game-changing onboard technology projects alongside the team at Nokia Bell Labs”.