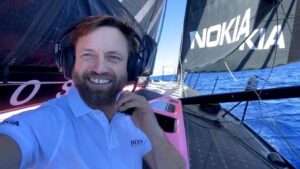 Alex Thomson is back in action in the Vendée Globe and preparing to enter the Southern Ocean, after structural damage onboard his HUGO BOSS boat temporarily halted his hunt for the title.

He was forced to slow the boat to make crucial repairs with support from his technical team, engineers and architects on shore. After 48 hours, the skipper was able to hoist his sails once again but has since had to maintain a cautious speed in order to complete the final stages of the structural repair work.

Now, 19 days into the race – which is expected to last around 70 days – the 46-year-old sailor from Hampshire is back sailing at full speed and preparing to enter the most notoriously challenging stage of the race, the Southern Ocean.

“It feels good to be focusing back on the race again and chasing the leaders into the Southern Ocean” Thomson said. “There is a long way to go but I’m feeling good and looking forward to heading downwind finally where I think we’ll really see what HUGO BOSS is capable of”.

Thomson is now more than 6,200 nautical miles (nm) into the 24,000nm race, which takes place just every four years and is widely regarded as one of the toughest sporting challenges in the world, not least because of the perilous conditions faced by the sailors who compete in it.

“So much is required of these sailors” said Ross Daniel, Technical Director at Alex Thomson Racing. “They have to be the skipper, the navigator, the meteorologist, the boat builder and so much more. What Alex has just been through is a massive task to take on, and he will always be his biggest critic. But he is a very experienced skipper and we have complete trust in him”.

Thomson, onboard HUGO BOSS, is now around 670nm behind the race leader, Frenchman Charlie Dalin on APIVIA. The Brit will no doubt be bolstered, however, by the memory of the 2016-17 Vendée Globe, which saw him finish in second place, less than 24 hours behind the race leader, Armel Le Cléac’h, having been around 800nm behind Le Cléac’h at Cape Horn.

“We’re certainly pleased to be back in race mode again” continued Daniel. “Today, we look to be the fastest boat in the fleet so that’s certainly good to see. We need to remember that there is still a long way to go so we shouldn’t necessarily expect to see Alex pushing the boat too hard, too soon. But what we can expect is to see is him back out there, focused on trying to win the race. That’s what we came here to do”.