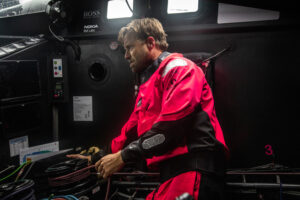 Alex Thomson shares an update following the news announced yesterday by his team, that he had discovered structural damage on the HUGO BOSS yacht, 13 days into the Vendée Globe.

“It was a bit of a shock at first but obviously it could have been a lot worse. It’s repairable and we’re not yet in the southern ocean.

“I called my technical team and they got the right group of people together – the designers, the engineers, the team. While they were digesting the information, that was my time to sleep. Knowing it was going to be a big job to get it all done, I got myself about six hours sleep so that I’d be ready.

“Then we started running through the repair plan so that I could fully understand it and ask the right questions. The first part of that was to stabilise the hull so that involved some cutting, gluing and bolting. That’s done now and it’s been laminated. The next part is to get the rest of the repair prepped. I need to get all the materials together and do as much of the cutting now while it’s still light. Then the rest of it doesn’t matter because it’s in the bow and it’s dark in there anyway. It’s really humid up in there. But we carry quite a lot of materials – under-water resin, glues that can deal with humid conditions – so the materials can deal with it quite well. I imagine a lot of teams don’t carry as much as we do.

“I’m in a rhythm now so I’ll keep going for as long as I can. It’s quite an intricate job so I can’t rush it and I need to make sure it’s right.

“I’m disappointed obviously but this is the Vendée Globe. This is what it entails. You’ve got to be able to deal with this stuff. This is why we carry these materials and tools, and why we’re generally very good at being able to deal with these things. Normally I feel angry and sad and emotional but I don’t this time. I just need to get on with it. I’m sure at some point the emotions may go the other way but, for now, there is only one thing to do and that is to get the job done as best as I possibly can. I will do whatever it takes to stay in the race”.