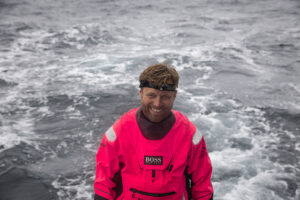 I hate being in a position of possibly losing out in a big way, which can happen when you’re following so I’d much prefer to lead. I think perhaps I’m a bit different in the way I sail. But I go out there to win, and so I want to be leading from the early stages.

A game of cat and mouse?

I try not to constantly think about who is behind me, chasing me. I used to be a bit like that but not so much any more. When I got a position report at 4 o’clock yesterday morning, and I was still bleeding miles (I know why – they had more wind than me, quite simply). I was like “right I’m going to do something about it, I’m going to get the bigger sail up, right, I’m going to do that.” And then almost immediately I gave myself a bit of a kick and said “Shut up Alex. Go back to bed, for goodness sake.” So that’s what I did, I went to bed again. This is a long race and it’s about making the right decisions all the way through, and sometimes that means holding off from pushing too hard even when you’d like to.

In this race you have to expect the unexpected. But there have been a few unexpected things already this time for me, namely what happened to Charal. I would’ve said that Jeremie would be right here with me at the front. He was the number one really in my book for this race. So yes, that was a big surprise. I felt really quite sad about it, to be honest. I sent him a little note saying that obviously I’ve been there and I know what it felt like, to make him feel a bit better about it all. And then the other one was the mast falling down on CORUM. I got asked on a live video call what did I think of it, and I didn’t even know so I was left a bit shocked. It’s terrible when anybody gets stood out of the race, but it does happen unfortunately, it’s unavoidable. But the people we were talking about being contenders before the race – Charlie Dalin, Thomas Ruyant – they’re right there behind me. So, no surprises there!

The atmosphere back home

Kate and the kids are loving it so far. Oscar (my son) is a bit disappointed because I’ve overtaken him in the virtual race. They’re really engaged, enjoying it and – like everybody else – they get quite addicted to the tracker. I speak to them most days and I do miss them. But I’ve also got photos of them all around the boat to keep me company.

This time around, I really wanted to bring people into the boat and let them feel what it was like. You have to present stuff in a certain way to be able to do that, and I love doing it. It gives me another focus and I enjoy it. I’m generally upbeat most of the time. If I get a bad position I might be grumpy for about 10 seconds and then I give myself a little shake and tell myself to get on with it!