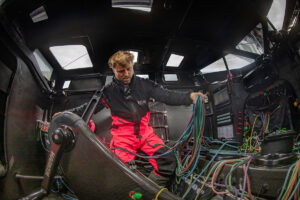 Alex Thomson has successfully crossed the equator into the southern hemisphere, as he maintains his lead in the Vendée Globe.

The HUGO BOSS skipper crossed the equator at 13:19 UTC today (Wednesday 18th November) after 9 days, 23 hours and 59 minutes at sea.

One of the favourites going into the race, which takes place just every four years, Thomson finds himself ahead of his nearest rival by some 70 miles.

Despite a gruelling start to the race – which saw the solo sailors navigate changing weather systems and a tropical storm – the Brit has passed through the Doldrums and has reported no major issues onboard the HUGO BOSS yacht, which was designed and built with the aim of winning the race:

“I definitely expected the start of the race to be tough but it’s not normal for it to be that intense, that’s for sure” he said today onboard HUGO BOSS. “Normally you wouldn’t have to negotiate all of these changing weather systems and then a tropical storm; that’s never really happened before. So yes, it’s been tough with very little sleep.

The solo, non-stop, unassisted round-the-world yacht race has only ever been won by a French skipper since its inception. Thomson, however, finished the last two editions of the race – in 2012 and 2016 – in third and second place respectively, and has spent the past four years preparing to go one better in 2020:

“I’m always desperately worried to lose out in the Doldrums” he continued. “So I’m very pleased to have made it in and out quickly. Now, I find myself in the lead which is exactly where I like to be. If you’re following, then you can get left behind and before you know it, everything can be over. I go out there to try and win the race. That’s what I’m here to do. And to be in this position at the equator, with the boat in good shape, gives me a lot of confidence in her performance but also in my own capabilities and decision making”.

33 skippers began the 24,000 nautical mile race on Sunday November 8th from Les Sables d’Olonne in France. Many of the fleet, after just 10 days at sea, have already experienced technical failures or have fallen victim to the perilous conditions of the course, forcing some to turn back to the starting line or to abandon their race altogether.

Thomson hopes to complete the race in around 70 days, this time at the very front of the pack.