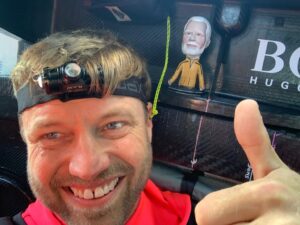 Alex got off to a good start, crossing the line without any complications, reaching to the west at a good speed and staying in the leading group.

It was a tough overnight period as he sailed through the light shifting winds. Alex compared the conditions he was experiencing onboard to being in the Doldrums with very unstable wind, gusting from 9 to 18 knots. This means that you very quickly go from being underpowered to over powered, and the boat constantly needs your attention to either ease the sheets or wind them in. There was therefore no real time to sleep. He’s managed to take some short rest periods but is looking forward to trying to get into a routine and banking some sleep.

You’ll see that there was a bit of a divide in the fleet this morning due to the skippers having to make a decision on how they tackled the Traffic Separation Scheme (TSS) of Finistere, which is an exclusion zone. Some opted to go in the inside and others the outside. This has now created a bit of a divide with a SE group and a NW group. HUGO BOSS remains in the NW group, close to Boris on Seaexplorer – Yacht Club de Monaco.

Throughout the day the skippers will see an increase in both wind and sea state as they sail west towards a frontal system that is tracking east across the Atlantic. By tonight they will be in the thick of it with winds of up to 35-40 knots and 4-5m waves. The western group will cross the front in the early hours of tomorrow morning and then tack onto starboard and start to head south.

Alex is sounding relaxed onboard and is happy with his position. No doubt we’ll get another video update from onboard HUGO BOSS to share with you all later today.