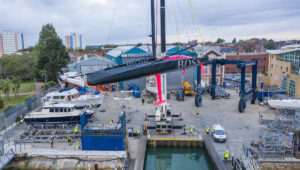 Alex Thomson Racing has completed the final service of the HUGO BOSS boat ahead of the highly anticipated Vendée Globe, which begins in less than two months’ time.

The service – something which takes place before any major yacht race – involved the team checking and servicing the boat and each of its components, in order to ensure that it is safe to sail around the world on November 8th.

As well as servicing the boat, the team also undertook a 90 degree test, a process which assesses the yacht’s righting moment upon its return to the water.

With less than two months to go until the start of the race, Alex and the team will spend the remaining weeks on the water training before departing for the race village in Les Sables D’Olonne, France.

“The final service went well and we feel in good shape” said Thomson. “Our new foils have arrived from Persico in Italy and they are now in. These version two foils are really a development of version one so they will actually look the same. But we’ve made some small refinements that should give us that little bit more in terms of performance and reliability.

“During the service we also made some other modifications to the boat and, since getting back out on the water, we can already see those changes have made a big difference. We’re seeing significant performance increases of up to 10% so we’re very happy so far! Now, time is everything for us, and we need to spend every available moment on the water before we leave for France next month”.