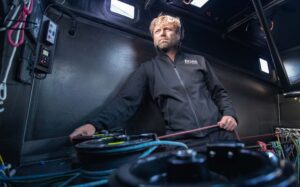 Less than four months out from the 2020 edition of the Vendée Globe, Alex Thomson has officially secured his place on the starting line.

Thomson completed a six-day solo passage onboard his IMOCA 60 race boat, HUGO BOSS, finalising his qualification for the Vendée Globe, which begins on 8th November.

“I saw a good mixture of conditions, from 2 knots all the way up to 40 knots, some upwind and some downwind.” he said. “It was a really good test of the boat. There were a few challenges along the way but that’s part of the reason we do the qualification.

“This was the first time I’ve sailed solo on the boat and, I can tell you, she is a real pleasure to sail on your own. I’ve been blown away by her performance and I’m super happy with the set up. Being inside the cockpit, protected from the elements, is a real game changer, particularly as foiling offshore takes much more of a toll on the body”.

Thomson will be one of more than 30 skippers who will this year compete in the Vendée Globe, which takes place just every four years and sees sailors depart alone from the seaside town of Les Sables-d’Olonne in Western France on a 24,000nm journey around the world.

In order to qualify to compete in the race, skippers must meet certain criteria. For Thomson, having finished the 2016-17 edition of the Vendée Globe on his previous boat, he was required to complete a 2,000nm passage onboard the new HUGO BOSS, which was designed and built specifically for him to race in 2020.

And while the Brit completed his first solo miles, he was sure to keep one eye on his fellow IMOCA skippers who were in action in the Vendée-Arctique race: “Of course, we were disappointed not to compete in the race”. Thomson continued. “I was following it closely from the boat; it was riveting from start to finish. But as much as we would have liked to have been there, we weren’t ready to race. It was too big of a risk for us to take so close to the Vendée Globe and so it was absolutely the right decision not to compete”.

Having finished the past two editions of the Vendée Globe in third and second place, Thomson and his team are focusing all their energy on securing a victory in 2020-21: “We’re in a race against time to the start line so every day counts from now until then” he said. “Every day, we learn more about the boat and that learning process will continue right up until the start of the race. There is only one objective – to win. Nothing else matters, and everything we do between now and November 8th has to bring us closer to that goal”.