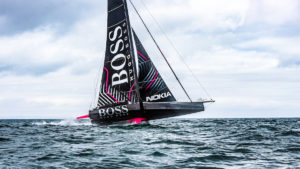 Alex Thomson has returned to the water onboard the new HUGO BOSS, the boat which he hopes will lead him to victory in the 2020 Vendée Globe.

Thomson and his team – much like their competitors in the IMOCA class – were unable to train on the water for some 9 weeks due to the COVID-19 pandemic. Following the easing of lockdown restrictions in England, however, the team have been able to return to the water to commission the yacht, before re-commencing their training.

The news comes as organisers of the Vendée Globe this week confirmed that the race – which takes place just every four years and is considered the pinnacle event in the offshore sailing calendar – will indeed go ahead as planned on 8th November from Les Sables-d’Olonne in Western France.

With less than five months to go until the start of the round-the-world endeavour, Thomson has made clear the team’s sole focus over this period will be maximising their time on the water and optimising the performance of the HUGO BOSS boat:

“For us, the focus is – and always has been – the Vendée Globe.” said Thomson. “Everything that we do now has to be geared towards us taking to the start line on November 8th in the best possible shape

“Ahead of the Vendée we were scheduled to race in the New York to Vendée Transat, but the race was cancelled due to COVID-19. IMOCA have since organised a replacement race – the Vendée-Arctic-Les Sables d’Olonne – which is due to begin on July 4th but we have made the decision not to participate.

“That decision was based on a number of factors. We felt that the race did not align well with our schedule and there are also, of course, still restrictions on travel and quarantine requirements, which would make competing in the race more complex. I also have some concerns over the risks associated with competing in a race which takes boats further north than Cape Horn is south. For us, it was an unnecessary risk to take so close to the Vende Globe.

“Ultimately, quality time on the water is of paramount importance now and we’ve put together a schedule that we believe allows us to use the time we have left in the very best way.”

Over the coming weeks and months, Thomson and his crew will train offshore in a bid to further develop and enhance the performance of the HUGO BOSS boat, which launched in the summer of last year after more than two years in design and build. Thomson will also complete his solo 2,000 nautical mile passage, a final qualification requirement for the Vendée Globe.

“We feel in really good shape” he continued. “Of course, like all the teams, we’ve lost time on the water but that was out of our hands. The team has adapted well and we’ve really made the most of this period. Now it’s about putting the knowledge we’ve gained – and projects we’ve worked hard to develop – to the test. We’re now a few days into our training and I’m very pleased with the decisions that we’ve made so far. HUGO BOSS is performing very well indeed!”