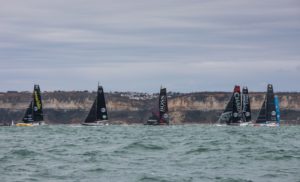 The northern pack have now reached the ridge of high pressure. The wind in this area will be very light and inconsistent.

The key for all six boats in this pack – including Alex and Neal on HUGO BOSS – will be to keep moving and maintain some apparent wind because as soon as they stop, it will be hard to get going again. This will be clear when you look at the tracker. The six boats will all be pointing in slightly different angles to try to make the best speed in the localised wind that they have in a southerly direction of the trade winds.

Once HUGO BOSS punches through to the other side, the hunt will be on to pull back some miles. We’ll see the two groups converge and the boats will decide on the best  at which to cross the equator.

We’re keeping our fingers crossed that Alex and Neal are able to keep momentum over the next 12 hours.