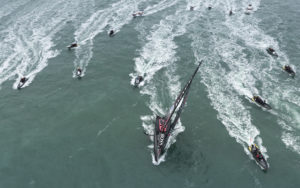 Alex and Neal are now committed to the western route onboard HUGO BOSS. Over the coming days, it will appear on the race tracker that the boats which took the southerly course are further ahead, ticking more miles off towards the finish line.

However if we consider the long term effect in the Atlantic, when we look at the weather models the boats to the south could face light upwind conditions over the next 2-3 days, making it harder for them to punch through the trade winds.

Alex and Neal meanwhile, on the western route, will pass an old dissipating low pressure system and head towards another new system developing off the eastern sea board. By the time they start to head south, towards the trade winds, we’d expect to see them pick up pace and for fleet positions to change.

It will certainly be a few more days before we see for sure which teams took the right course!

Onboard HUGO BOSS, Alex and Neal are in good spirits. They both managed to find an opportunity to get some sleep, and both are recharged and ready to tackle what lies ahead of them.