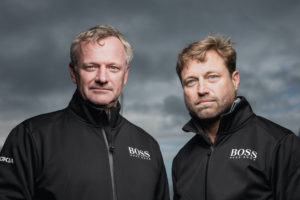 Thomson and his co-skipper – fellow Briton Neal McDonald – departed from Le Havre, France this afternoon to begin the double-handed 4,350mile race, which finishes in Salvador, Brazil.

In what is the 14th edition of the classic offshore race, a record 29 yachts within the IMOCA class will compete, each looking to finish on top in the famous ‘coffee route’ sprint.

The race marks the first time that fans of Skipper Thomson and his team will witness the new HUGO BOSS boat in competitive action, following the yacht’s launch just last month on The River Thames in London.

HUGO BOSS – the name carried by each of the team’s previous IMOCA 60 yachts – marks a significant step forward for the ocean racing team. More than two years in design and build, the ground-breaking yacht is the result of 80,000 hours of labour by more than 100 designers, architects, engineers and boat builders. The boat also features new, cutting edge technologies, developed alongside with the team’s Technology Partner Nokia Bell Labs.

Thomson remains ‘one to watch’ in the highly competitive IMOCA class. In 2016 he broke the British record in the solo, non-stop, unassisted Vendée Globe, topping the third-place finish he secured in the 2012-13 edition of the race, which remains the pinnacle event in the IMOCA calendar.

And the British sailor finds himself in good company as he tackles the double-handed Transat Jacques Vabre. His Co-skipper, Neal McDonald, is a seven-time Volvo Ocean Race competitor, and former Olympic sailor, with more than 30 years’ experience in professional sailing.

Now Performance Manager at Alex Thomson Racing, McDonald has worked closely alongside Thomson and his team since 2016. The Transat Jacques Vabre, the pair believes, will be a prime opportunity to work together to learn more about their ground-breaking new boat:

“This is a learning and testing opportunity, first and foremost” said Thomson as he prepared to begin the race today. “The race will give us the opportunity to understand just what this boat is capable of, and it will undoubtedly inform the next stages of our development as we head towards the Vendée Globe next year”.

The boat has been built with that very goal in mind; to win the 2020 Vendée Globe, a race that remains one of the toughest sporting challenges in the world today, one which has only ever been won by a French sailor. With just two competitive races in the team’s schedule before then (the Transat Jacques Vabre and the New York-Vendée race in June 2020), the British team plans to maximise every available opportunity to familiarise themselves with what they hope will be a boat worthy of Vendée Globe gold.

“We of course know the Transat Jacques Vabre very well.” Thomson continued. “We finished second in this race in both 2003 and 2015. However, this time around – with a new boat – the goal is to reach the finish line with the boat in good condition, and with a great deal of knowledge gained along the way. If we can do that, then I believe we place ourselves in a very good position for 2020”.

The new HUGO BOSS is one of five new generation IMOCAs in action in the Transat Jacques Vabre. As the skippers begin their 4,350 mile journey, each will be hoping that the decisions they made during the laborious design and build stages will pay off, and that they successfully – and safely – make it to the finish line in Salvador de Bahia.