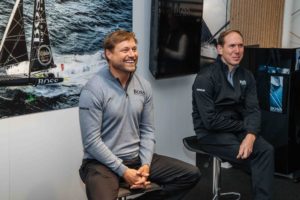 Hosford, who joined the business in 2010, has been instrumental in some of the ocean racing team’s greatest successes both on and off the water. During his tenure the team celebrated the renewal of its title partnership with HUGO BOSS, as well as the formation of its ground-breaking technology partnership with Nokia Bell Labs. Hosford also played a pivotal role in leading the now 25-strong racing team during its successful 2012 and 2016 Vendée Globe campaigns.

Alex Thomson said: “Stewart has contributed invaluably to the continued growth and success of this team. Many of our greatest achievements have been down to the dedication and unwavering commitment that he has shown. Without him, our team would not be where it is today. Stewart departs with the full support of myself and the team, and I have no doubt that he will continue to closely follow our journey to the Vendée Globe 2020”.

Hosford leaves Alex Thomson Racing to pursue new ventures at Origin Sports Group, the portfolio sports business owned by Sir Keith Mills, Chairman of Alex Thomson Racing. Having worked closely with Mills for many years, Hosford will now play a key role in the management and execution of a major new sports event outside the world of sailing, set to be announced later this year.

Hosford said: “As a team, we have achieved many successes over the past ten years. I have immensely enjoyed working with Alex and the whole team, who are without doubt some of the most committed and talented individuals in their respective fields. I will continue to support the team as they move towards the Vendée Globe and I absolutely intend to be on that starting line, cheering them on in November 2020”.