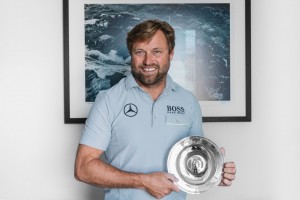 On Monday night Alex was presented with the Chichester Award at the Royal Yacht Squadron in Cowes.

Presented by The Princess Royal, this prestigious award was given to Alex in recognition of his offshore sailing achievements.

First awarded to Sir Francis Chichester in 1967 for single-handedly circumnavigating the globe in Gipsy Moth IV.  To date, the trophy has only be awarded sixteen times. Other past recipients include Sir Robin Knox-Johnston & Dame Ellen MacArthur.

Alex is pictured here with a silver Armada dish, which is the ‘keeper’ as the trophy remains at the Royal Yacht Squadron.